Now you See it, Now you Don't 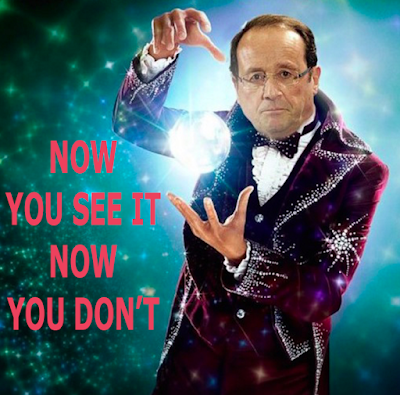 "The French people are dissed, duped, and betrayed,

Civil lack of security just got added to the failures of our succession of chiefs, revealing the failure of the political elites in the governing of France

Our pols have gotten to be carnival barkers to the voters, buying votes with promises and lying to them without shame to create -- or to keep up -- illusions.
The French people are dissed, duped, and betrayed, dissed, and the lies are ever more gross and the promises are ever more insane.
Over 40 years, the usage has been to make believe that we are still in the "the Glorious Thirty" [years of economic good times, '45-75 ], that it's all going to get better and better thanks to globalization, that we can go into debt because growth is for sure, or almost for sure. The public deficit has become golden rule. With such management, the French will not pass on a common heritage to their children but interest payable to international private banks.
Another illusion: Europe means Peace. Like yesterday in Yugoslavia, like in Ukraine today, like in France, tomorrow. The goddess Europa is starving for tearing apart sovereign states, the better to seat it own power and to favor American hegemony. Weakening a state leads irredeemably to ethno-sociocentrism, to the exacerbation of differences, to civil war, to the eradication of a nation.
Brussels, the marketplace for mondialism, spurred by the lobbies, is an illusion of democracy. One has but to compare the power of the the European Commision, the European Parliament, and European Council to realize that it is the non-elected who steer the syndicate of interests. Europe is no institution in the service of inter-state relations, but an enterprise of fragmentation to serve private economic  interests: the truth stops at the door of the private interests defended by our very dear Commissioners, non-elected technocrats.
At rare moments, our pols find themselves in the same situation as the morning-after drunk. They've got a petrified throat, they worry and wonder about whatever they did the night before, and seek out excuses, or lies, to justify their behavior, and check their wallet after the bender.
They face the choice of every drunk: whether to get back to the bottle to forget the mistakes of the night before, or to take into account the realities of the day.
But the superiority complex of our chiefs is a mismatch with the good sense of the people. France, in its search for the verity will end up making a tabula rasa of these plotters who privilege private interests to the detriment of national unity and the common good. After years of degeneration, we are approaching a new dawn for our country.
"What do they call it, when the day brightens like today, and that everything is trashed and ruined, yet there is air to breathe, though one has lost everything, the innocent murder each other, but the guilty are breathing their last, in a nook of the day that rises?"
"It has a beautiful name, Narsès. They call it the dawn.
from Jean Giraudoux's Electra

Posted by FearFeasaMacLéinn at 16:30 No comments:

By Joseph Gerson
and Paul Shannon

We are staggered by the brutal murders in San Bernardino. We’re amazed and depressed that in its immediate aftermath Congressional Republicans voted against the banning of weapons sales to potential terrorists. And we worry that racist and xenophobic pressures to keep war refugees from our shores, and vengeful calls for military escalation in Syria and Iraq are precisely the reactions that ISIS’ strategists anticipated. These responses auger decades of futile and nationally self-destructive war.


The esteemed Middle East historian and former State Department Planning Council member William R. Polk put it well:  In the wake of the Beirut, Paris and now San Bernardino massacres and the downing of the Russian passenger jet over Sinai, the West is “falling” into the ISIS trap.”  Polk reminds us that the vast majority of people in much of Syria and other Islamic nations “are caught between two dangers: ISIS and us.”  They and their families are not fanatics. Like the vast majority of people everywhere they simply seek to live peaceful and secure lives. Caught between the West (including Russia) and ISIS, they are the strategic prize in a battle which is more “a battle for minds” than for territory.


Turning away desperate war refugees, in ways reminiscent of the Alien Exclusion Act in the 1920s, the barring of European Jews in the late 1930s, and the internment of Japanese-Americans in the 1940s is no way to win hearts and minds. Nor is bombing hospitals and wedding parties.

The world, and certainly Arabs and Moslems, understandably take lessons and make choices about their allegiances in response to the West’s treatment of people fleeing for their lives, not to mention how they are treated in work places and on the streets of Europe and America. Racism, Islamophobia and unjustified fears led to the calls by many Congressional representatives and governors to keep even a tiny portion of these women, children and men from entering our country – even after extended and repeated vettings that are twice as demanding as those that Tashfeen Malik, one of the two San Bernardino murders, overcame. Former U.S. ambassador to Afghanistan and Iraq Ryan Crocker put it well when he said that such treatment of refugees is “a gift to ISIS.”  It blares implacable U.S. opposition to 22% of the world’s people. We shouldn’t be surprised when we suffer blowback from our ignorance and callous actions.


Any strategist knows that you don’t win by competing on your adversary’s terms.  As in judo, we should be careful not to let our strengths - especially high tech military and bureaucratic capabilities – become our greatest vulnerabilities.
We should have learned from the French failures in Algeria and their Indochina War, the Russian and U.S. invasions of Afghanistan, and the failed war in Iraq, that ideas and ideologies aren’t destroyed with bullets, bombs, missiles or drones.  Insanity, as the saying has it, is doing the same thing over and over again and expecting different results. Just as was the case with German bombings of London and British bombings of Hamburg during World War II, the U.S. aerial devastation of Indochina, and the 21st century legacy of drone attacks across the greater Middle East. All were deadly and costly strategic failures, stiffening the will of those under attack.
As retired Colonel and history professor Andrew Bacevic has warned “With the Pentagon already claiming a body count of 20,000 ISIS fighters without notable effect, this campaign won’t end anytime soon.” Yes, Al Qaeda has been weakened, but it has also metastasized into ISIS and Al Nusra in Syria and into a host of other violent jihadist formations. and to the domestic terrorist attacks from Beirut, and Paris to Fort Hood, Boston and San Bernardino. Committing ourselves to what some term World War III or World War IV means embracing a futile and nationally self-destructive generational war.


ISIS’s brutal and dramatic barbarism, from public crucifixions in Syria and Libya (not unlike those inflicted by our ally Saudi Arabia in Riyadh) to the Beirut, Paris and San Bernardino massacres are designed to instill fear. Their hope is that they will generate still more Islamophobia and racism that will further alienate and anger Muslims who are already marginalized, and thus spur more recruits to their cause and more domestic terrorism. Similarly, by luring the West into responding to terrorist attacks by increasing the air war and dispatching more “boots on the ground,” they are calculating that the inevitable “collateral damage”  will turn hearts and minds away from the West and toward the Islamist fighters who claim to be their defenders..


Faulkner wrote that the past isn’t dead, that it isn’t even past. And in the confrontation with violent Jihadism, we carry the freight of the Crusades (listen to some of the Republican presidential candidates,) European colonialism and U.S. neo-colonialism. Clearly, the most immediate cause of the rise of ISIS was the 2003 – 2011 invasion and occupation of Iraq. Not only were over 4,500 U.S. soldiers killed and thousands more physically or psychologically incapacitated for life; but hundreds of thousands of Iraqis were killed. Iraq, a British colonial construct, was destroyed as a country. In addition to the physical destruction, the Shiite government installed by the U.S. marginalized and terrorized the country’s Sunni population, opening the gates of hell through which ISIS emerged.

The roots of the crisis are, of course, still deeper, and they will ultimately have to be addressed if this decades old war is to be ended. To this day former Carter National Security Advisor Zbigniew Brzezinski boasts that back in 1979 it was he who lured Moscow to invade Afghanistan. His goal? To bleed the Soviet Union in much the same way that the Vietnam War weakened the United States.  U.S. and Saudi creation and support for the Mujahedeen in the 1980’s created the foundations of post-modern armed militant jihadist forces that are spreading terror today.

Professor Elaine Haggopian, Noam Chomsky and others have explained, these jihadist extremists did not simply fall from the sky and into Afghanistan, Yemen, Iraq, Syria, and Libya.  They were nourished by decades of Washington’s assaults against secular Arab nationalism and by our country’s oil-rich strategic ally Saudi Arabia. Saudi financed madrassas across North Africa, the Middle East and Central Asia exporting Wahhabi fundamentalism. And, this helps to explain why it was no accident that most of those who attacked the U.S. on September 11, 2001 were Saudis or that Saudis have been the leading funders of Jihadist warriors.

True, France, England, other European countries, Iran and other Gulf States, and especially the brutal Assad regime in Syria have played their roles in promoting instability, sectarian violence and wars across the Middle East.

There are alternatives to repeating the failures of seeking security in our culture of dominance and the self-defeating wars that follow. A new approach is needed, one that begins by not making things even worse? Policies designed to provide succor to war victims, to avoid another desert quagmire, and to avoid military incidents like Turkey’s downing of a Russian warplane over Syria that could trigger catastrophic great power war. Alternatives should include:

·         Welcoming refugees forced to flee their countries to avoid war and death inflicted by others.
·         Redoubling commitments to the Vienna negotiations with Russia, the Europeans, Iran and Syrians for a ceasefire and the creation of a Syrian government of national unity.
·          Isolating ISIS by working to demilitarize the region. Immediately end all arms shipments to the Middle East. Weapons shipped to U.S. allies and “opposition forces” have fueled the Syrian War, often falling into ISIS and Al Qaeda hands.
·         Ending material and financial support to ISIS and Al Qaeda and their clones. The key action is to end the U.S.-Saudi Alliance that has been critical to the emergence of these forces and has inundated the whole region with modern weapons that always end up in their hands.
·         Expressing remorse for what we have inflicted on the people of the Middle East since the beginning of U.S. Middle East hegemony in 1945. We have the model of South Africa’s truth commissions.

As we saw in the Arab spring, there are millions and millions across the greater Middle East who thirst for peace, freedom and democracy. It is time to end our self-defeating wars, our support for political repression and the erection of barriers against desperate refugees so that their voices can emerge again.

* Joseph Gerson is the Program Director and Paul Shannon is Program Associate and of the Peace & Economic Security Program of the American Friends Service Committee, based in Cambridge, Massachusetts.
Posted by FearFeasaMacLéinn at 16:03 No comments: